Before attending university I visited Walden in book form.  Later, I was quite pleased when a college professor, way back when, assigned it as both, required reading, and material to draw from for a reflective essay.  At that time in my life, while re-reading Henry David Thoreau’s literary masterpiece, I decided some day I would visit Walden Pond.

That visit to a pond, which seemed more the size of lake, finally came to be on a slightly breezy, yet warm, June day in 2017. On that morning, Walden Pond looked bluer than the skies above it, while swimmers, and sunbathers enjoyed the tranquility Thoreau had come to know in the time he spent there. Still the slight breeze left the pond rippled, rather than still, and photographic reflections from around the lake waned.

Upon returning home, I dug through an old box of college essays and poetry, I have kept all these years to compare my actual visit with my reflective essay on the book. Of course I never imagined swimmers in the pond, as Thoreau was there alone, yet the additional noise brought about by both children, and adults did not dampen the beauty, or serenity the pond holds.

The serenity of the pond was what Thoreau imparted to his reader, through his eloquent writing and was what I attempted to reflect in the essay.  But, also in the paper I developed a theory that Thoreau went to the pond because as a writer he lacked material, and needed subject matter.

My hope now in writing this piece, and by adding a short excerpt from the paper is that I can transfer the feeling of Walden Pond I perceived so many years ago to my children, should they ever read my words here.  So here goes, an excerpt from an essay written in the previous century, by myself,  about Walden, and it’s author Henry David Thoreau. 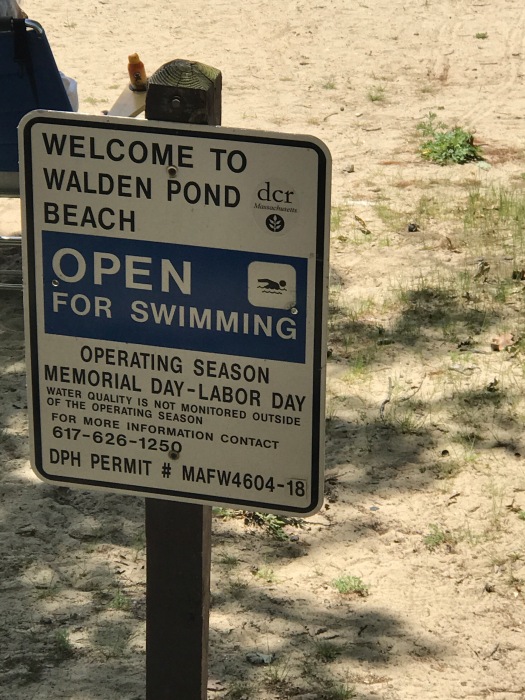 From my essay,  Walden

I first visited, Walden, on my own time, when I was freely able to ponder Henry David Thoreau’s literary work, paragraph by paragraph, and metaphor by metaphor. I perceived Thoreau’s deliberate lifestyle to be transcendentalism’s purest form. A life in which one attempts to elevate all aspects of the inner self to perfection.

Most infer from Thoreau’s writings that he went to Walden Pond to commune with nature. The writer in myself believes instead, that his respect for the authors of classic literature was so great he wished to elevate himself to their level.  Thoreau expands on his respect for writers and the classics in the “Reading” chapter, which is strategically placed as the third chapter of the book-taking its place behind the first two chapters that explain his intentions and the location of  his planned experiment.  Thoreau believed writing to be an art form, and through authorship he could attain purity as he considered the classics  to be man’s noblest thoughts (146) while stacked books scaled the way to heaven (148). 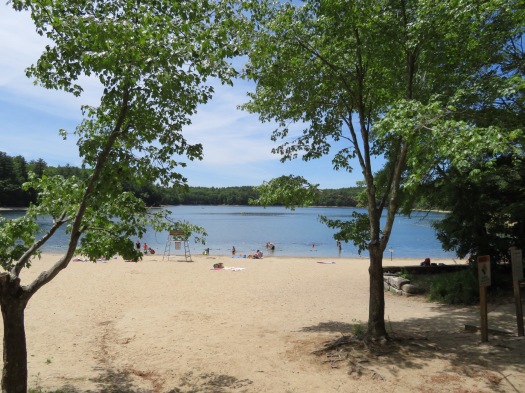 As I wrote in the excerpt, I took a different view to what most believe. Most others think Thoreau went to Walden Pond to commune with nature, and after looking at the above photo it is difficult to disagree with that assertion.   However, that was the beauty of not seeing Walden Pond before I had to write a paper on it, and I had only his words to go by, Thoreau’s words.

Thoreau described the pond, measured it, walked its banks, monitored the weather, noted the flora and the fauna and even the position of the stars.  Now, I, too, have walked the circle round his pond and seen others unwinding with a good read, while their toes touch the cool water. I appreciated watching swimmers  stay in shape as they lapped the width or length of the pond. And, I watched  parents sunbathing while children splashed.  On that day I understood that I was correct in my assertion of so long ago, that Thoreau did need material for a book. He needed to absorb all things Walden, in essence study it in great detail in order to elevate himself to the level of the classical authors.   Walden Pond, was the place he needed to go to, to become the person he aspired to be.  Thoreau’s achievement took  him 2 years, 2 months and 2 days. On the day I was there, a slight breeze barely rippled the water as though Thoreau were present and asking all who were there, either to swim, or walk or ponder….how long it would take to become the purest person one chooses to be?

This is a text widget. The Text Widget allows you to add text or HTML to your sidebar. You can use a text widget to display text, links, images, HTML, or a combination of these. Edit them in the Widget section of the Customizer.